The recent (ongoing) Seoul virus outbreak associated with pet rats and recurrent Salmonella outbreaks linked to feeder rats have focused more attention on the national and international movement of rodents. Most people probably don’t realize the massive number of rodents that are shipped internationally, and we don’t really understand the risks. Anytime animals are moved from one population to another, they can bring infectious diseases with them. In general, the more movement (both in terms of occurrences and distance), the more risk.

Here are some highlights:

Where the animals went and if they brought any problems (e.g. infectious diseases) with them cannot be tracked. It’s assumed that the bulk of imports went to the pet trade.

There are valid reasons for animal importation, and some reasons that are hard to justify. One thing to consider is whether importation is really needed, at least on this scale. It’s not exactly difficult to breed those most commonly imported species in captivity, so I have to assume that cost is a motivator. It’s simply cheaper and easier to import massive numbers of pet rodents from large scale breeding operations in certain countries. Large commercial breeding operations may pose increased risk because of the potential for widespread dissemination of infectious agents, something that has been seen with a variety of pathogens. It also raises welfare questions, with large scale breeding and long-distance shipping, versus local smaller scale breeding and shorter distance transportation. What percentage of animals born in those operations are alive in households a year later? I have not idea, but fear the number is low. Another thing to consider is behavioural issues. Bites are among the biggest problems associated with pet rodents. Is an animal bred in a warehouse in Europe and shipped to North America, passed through a large central warehouse, distributed to a local pet store then sold into a household going to be a well-adjusted pet? Maybe, maybe not. Local breeding doesn’t mean it’s guaranteed to be well-adjusted either; however, I have to assume that a small scale breeding operation and less stress of shipping would only help.

Cost drives a lot of this. So does lack of public awareness. Would people pay a premium for a locally raised hamster? Maybe, since the cost is pretty low already. Locally-sourced animals aren’t necessarily safer and they can still pose various risks (as the Seoul virus outbreak showed), but there’s probably an added degree of risk from imported animals. People simply don’t think about from where that animal in the pet store comes, and they usually don’t think about disease risks and what they need to do to reduce those risks either. More public education could go a long way. 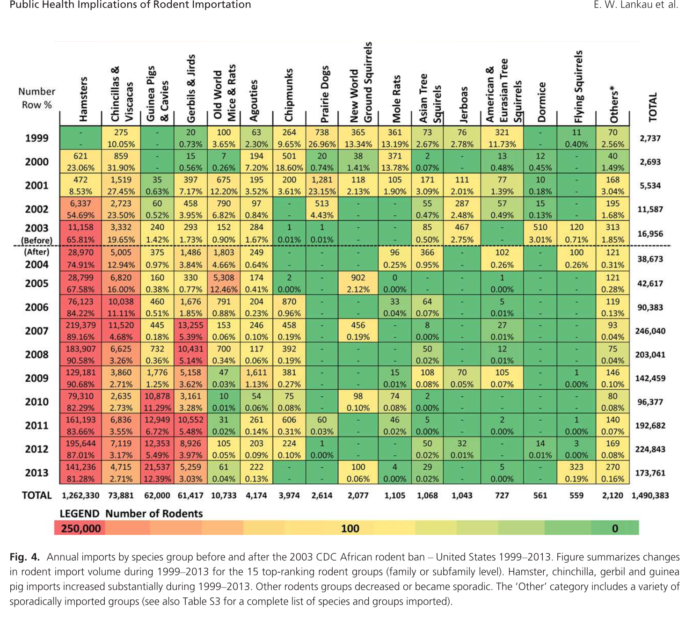