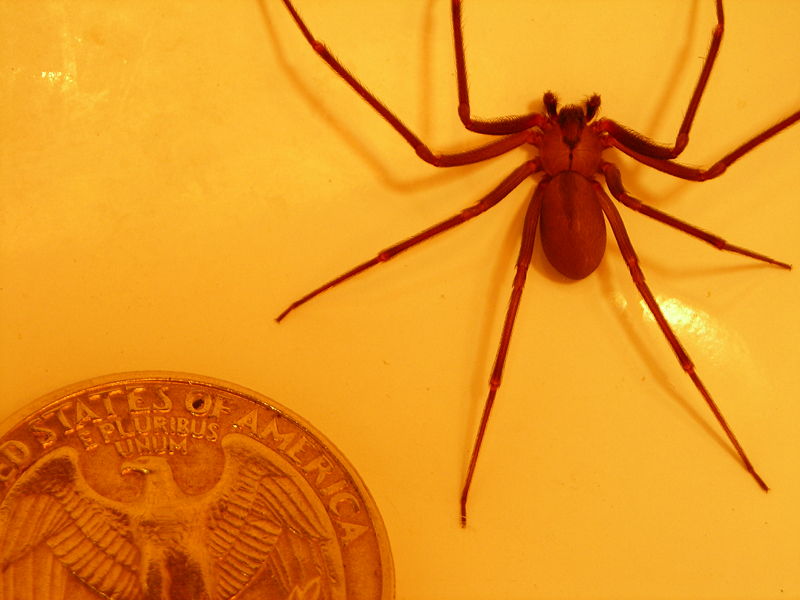 Skin reactions from spider bites are usually very mild, if they are even noticed.  However, bites from certain kinds of spiders can cause severe skin lesions that may develop into  deep open wounds.  These are sometimes called "volcano lesions". Deaths due to such bites have been reported, mainly in children. However, the relatively small brown recluse spider, Loxosceles reclusa (see picture), is the only one of approximately 20 000 different species of spiders in the Americas that can cause these severe lesions. This spider is native to the midwestern and southeastern US, and is rarely found elsewhere.

In many cases (particularly in people but also in pets), a variety of focal skin lesions, including volcano lesions, may be diagnosed as a "spider bite" without any further testing. This is even done in areas where  brown recluse spiders don’t live!  Another possible cause of a volcano lesion that may be mistaken for a spider bite is methicillin-resistant Staphylococcus aureus (MRSA). It is clear that many MRSA infections in people are being misdiagnosed as spider bites, but I have also talked to various pet owners whose dogs had MRSA infections that were originally diagnosed as spider bites. Most of these were from areas where brown recluse spiders would never be found. If an MRSA infection is diagnosed initially as a spider bite, the delay in starting proper treatment can lead to more prolonged and potentially more serious disease.

In addition to MRSA, the related bacterium methicillin-resistant S. pseudintermedius (MRSP), which is more common in dogs and cats than in humans, could be involved in similar skin infections. This is just as serious for the pet, but less of a concern for people in contact with the pet.  For more information about MRSA versus MRSP, check out our blog on Methicillin-Resistant Staph: What’s in a Name?