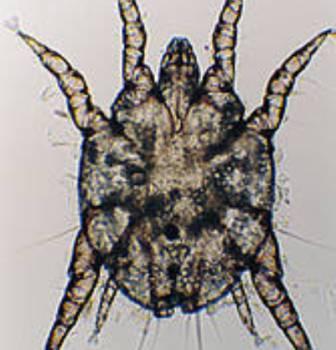 Ear mites are a common problem in dogs and cats, particularly in young animals, as well as in strays and animals in shelters. The species of mite typically involved is called Otodectes cynotis. It is transmitted between individuals by direct contact (basically hopping animal to animal, as it does not survive for long in the environment), and causes an extremely itchy ear infection (which can get even worse if there is secondary infection with bacteria or fungi).

There are a few reports of suspected infections with Otodectes in people. Considering how common ear mites are in cats and the small number of reported human infections, transmission between pets and people is probably rare, but it certainly can occur. Most of the reports are somewhat circumstantial, involving people with itchy skin lesions that developed after a pet was diagnosed with ear mites. However, one curious veterinarian took it a step further.

Dr. Robert Lopez, of Westport, New York, intentionally infested himself with ear mites from infected animals, and described the outcome in a 1993 edition of the Journal of the American Veterinary Medical Association. First, he took a sample from the ear of a cat with ear mites and placed it in his own ear. He described the scratching sounds and movement that he could feel as the mites explored his ear canal. Severe itching developed, to the point where "sleep was impossible." The intensity of the itching and mite movement decreased over time and the infection resolved by itself within a month.

Personally, I think I would have stopped there. (Actually, I wouldn’t have made it to that point, but if I did, I certainly wouldn’t have tried it again.) Yet, Dr. Lopez wanted to confirm his findings so, a few weeks later, he infected himself again with mites from another cat. The same type of disease developed, although it was less severe and only lasted two weeks.

Guess what he did next – he tried again, wanting to see if the reduction in severity might indicate development of immunity. So, he infected himself a third time, with the outcome being milder disease. This suggested to him (logically so) that immunity to the mites might develop, something that fits with the fact that ear mite infestations are more common in young animals.

Self-experimentation is generally frowned upon, but has been the source of remarkably scientific discoveries, even Nobel Prize winning discoveries (e.g. the role of Helicobacter pylori in gastric ulcers in people). I don’t think Dr. Lopez is in line for any prizes, but it shows how a little academic curiosity along with minimal squeamishness can provide some interesting information.

What’s the relevance of all this? If your pet has signs of ear mite infestation (e.g. scratching at the ears, dirty material inside the ears), get it examined and treated. If nothing else, this needs to be done because it’s a very uncomfortable problem for the pet. There’s also some risk of human infection, but it’s probably minimal. The mites have to make it from the pet’s ear to your body to cause problems. The quicker they are treated, the lower the likelihood of this occurring. Human ear mite infestations, be they in the ear or on the skin, seem to resolve by themselves, with treatment of the animal being the most important part of control. However, it can be a pretty uncomfortable condition and one most people (with the possible exception of Dr. Lopez) would certainly rather avoid.